When the Best-Laid Plans Go Astray: A Primer on Labor Productivity

It All Begins With the Bid

When a contractor bids on a construction project, the bid usually is based on an estimate, which is factored from a similar project. The bid contains materials and labor as its two primary components.

If actual construction work deviates from the anticipated plan, once the contract is signed and the project is underway, several situations may result: 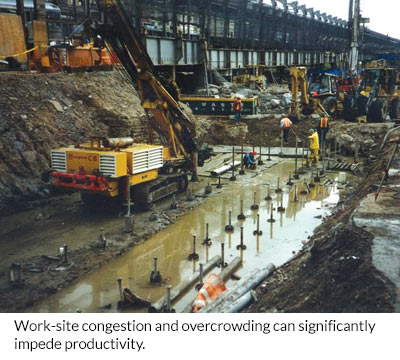 Problem projects typically suffer from both schedule delays and some form of disruption to the planned labor productivity rate. In order to resolve the situation, it is necessary to segregate these two types of occurrences (time delays and productivity issues) and analyze them to determine: a) the causes; b) who was responsible; and c) what damages (costs) were incurred as a result of deviation from the original plan. If responsibility can be tied to a party involved in the contract, the cost of the loss may be recoverable from that party.

A schedule analysis helps demonstrate the reasons for delay by identifying the circumstances that negatively affected the original baseline schedule dates. The reasons for disruption to labor productivity generally are more complicated.

Lost labor productivity claims require a detailed issue analysis in order to assess responsibility for the cause-and-effect relationships. This can be difficult, as more than one party may be responsible and the potential causes are many, including out-of-sequence work, skilled labor shortages, worker crowding/congested work areas, interference of trades, owner interference, design problems and defects, contractor’s inadequate management/supervision, failure to properly staff the project, overtime, and acceleration.

The most persuasive argument for lost labor productivity requires a cause-and-effect demonstration of actual job performance, using contemporaneous records of hours expended and quantities installed. In order to perform this analysis, actual labor productivity data must be sufficiently detailed to demonstrate the variation.

The as-built labor productivity data may be retrieved from sources such as the project daily reports, quantity and man-hour reports, progress payments, and certified payroll records. The comparison of this data for certain periods of time during the project may identify stretches of both poor and acceptable productivity, further isolating the causes of specific events on the project and demonstrating their effect on labor.

As-planned labor productivity may be compared to actual productivity rates, which would quantify the variation vis-à-vis the original plan. This comparison would not, however, adequately validate the original labor estimate. Comparing similar work activities between non-affected and affected work periods — for example, comparing labor productivity during installation of ductwork in an enclosed, watertight building to the installation of ductwork on open decks where a waterproof roof had not been installed — is a better and more persuasive method of validating the estimate. In comparing such activities, the variation in installation rates can be attributed to a specific cause (in this case, environmental factors) with the responsibility allocated to a contractual party.

The recovery of cost overruns by any contractual party would require proof that:

In summary, delay claims are filed for losses caused primarily due to project time overruns. Labor productivity claims originate from disruptions to the work that add additional labor hours for the installation of the original contract quantities and, thus, result in labor cost overruns.

When it comes to problem projects, the challenge lies in demonstrating the cause and subsequent effect on the project schedule and labor productivity. And, of course, making the case persuasively.