In accordance with its succession plan, Capital Project Management, Inc. (CPMI), has announced the appointment of Robert D’Onofrio, PE, CEng, as president, effective January 1, 2023. Rob assumes the position held for 25 years by company co-founder Michael D’Onofrio, PE. Mike will maintain a leadership role as a principal of the firm. 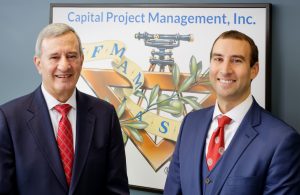 Mike is “very enthusiastic” about CPMI’s future. “We’ve built a national company from the ground up with a best-in-class team and the infrastructure to support our continued growth,” he says. “I am extremely confident in Rob’s ability to take CPMI to the next level.”

Rob has been a principal of CPMI since 2014. He opened the firm’s New York office in 2018, where he continues to oversee its rapid growth. Rob has evaluated more than $6 billion in claims, most recently spearheading high-profile domestic and international projects in a broad range of sectors—from stadiums to major infrastructure, industrial, and manufacturing construction. He has presented more than 100 lectures and has written or co-written more than 30 publications, including the book Construction Schedule Delays (Thomson Reuters). Rob earned both his degrees in civil engineering from Cornell University.

“I am honored to accept the role as company president,” says Rob. “We’ve built an exceptional track record delivering outstanding results. We will continue to invest heavily in the success of our clients and our team, as we advance the company’s market position.”

In addition, CPMI’s Todd Mayo and William Griffin, PE, PEng, have stepped into leadership positions as principals of the firm.

Todd Mayo joined CPMI in 2019. He has more than 25 years of experience in the construction industry, including managing the analysis and resolution of claims and disputes submitted to the Port Authority of New York and New Jersey during construction of the World Trade Center project and for the Metropolitan Transportation Authority’s East Side Access project. He also serves as a lecturer for Columbia University in its Master of Science in Construction Administration Program.

William Griffin has extensive experience in construction claims analysis and has spent more than a decade with CPMI. He has provided expert testimony on multiple assignments and has taken the lead in many of the firm’s largest construction dispute projects. Bill has handled assignments across all business segments, including airports, transportation, stadiums, power and water, industrial and manufacturing, medical facilities, courthouses, housing, and embassies.